When it comes to wedding toasts, there are a handful of phrases that have become so common that it’s painful to hear them roll off the tongue.  And it’s not the fault of the speaker, necessarily, if they haven’t ever been told otherwise.

Renowned sales trainer David (not Adam) Sandler once said something to this effect: “You can’t get mad at someone for doing something you never told them not to do.”  That’s how I feel about the following list.

The problem is that these quotes have become crutches to lean on, because they’re commonly repeated, they’re easy to say, and are low hanging fruit when searching for a cheap laugh.  When you’re delivering your toast, however, you want to be the OPPOSITE of common.  You (should) want to be memorable, to be uncommon, and to be a level or two above the average.

If you have already said any of these phrases, don’t sweat it.  Let’s just move forward into a brighter future!

So here’s the list, somewhat in order of least to most egregious:

Now, there are funny jokes to be made about this topic, especially if the couple comes from big families.  But you have to be more creative than the old “Time to start having kids” trope.  One of my favorite ways to approach this topic in a fun 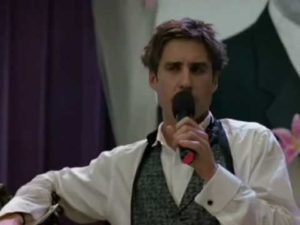 ny way is to speak in a dry-humor tone that the couple will make great parents to their 7 future kids.

Wait, you’re telling me that the couple didn’t get married as soon as you or your family members thought they should?!

I’m being sarcastic, of course, because this is a tale as old as time.  Family members and/or friends putting pressure on them anytime after the 1-year mark of a relationship.  Just like #10, there are creative ways to joke about a couple that’s dated for a long time before tying the knot, but if you’re not going to make the extra effort to be funny, then please save it.

Not the end of the world to say, but it’s become cliché.  It doesn’t add much unique content or memories to your toast.  Your energy would be better spent on a specific story or anecdote about the couple.

Actually, scratch that.  I can’t get enough of this joke.  Maybe some crowds will find it boring and hack-ey, but I love it.  Not even being sarcastic.

#6 – “I honestly don’t have anything prepared, so I just want to say…”

Maybe you’re not as prepared as you’d like to be, but don’t tell that to the audience!  If I’m in the crowd and I hear that, all I’m thinking about for the rest of the toast is that the person didn’t do their homework, they didn’t take it seriously, and the bride & groom won’t be honored like they should be.

Although this is technically a true statement, it doesn’t need to be in your toast.  I have seen it said as the precursor to something like, “But that’s probably a good thing,” or “but you’ve grown into….”

I’m all for walking down memory lane, but don’t suggest that life for the bride or groom was ever better than it is right now.  This is supposed to be the best day of their lives so far.  Don’t diminish that.

This is a case of unnecessarily bringing negativity into your toast.  If you roast people, do it in a friendly and lighthearted way.  This paints the couple as controlling and thin-skinned.  Not necessary to do this in front of hundreds of people.

Okay Judge Judy, take it easy.  Also, notice the subtle difference between this quote and something like “Here’s what you need to know about my brother/sister/best friend….”  Be entertaining and educational about the couple, not judgey and condemning.

Guess what?  We are ALL a little guarded/skeptical about our loved ones’ brand-new boyfriend or girlfriend.  It takes time to get to know people, to trust them, to let them into our inner circles.

But the phrase above is taking the easy way out.  Instead of saying this, share the story of when you first met.  Articulate that awkward introduction, or the quirk you noticed during an early interaction.  Give context and do so in a light way that explains how you’ve come to accept the way this person is, and beyond that, how you wouldn’t want them to be any other way.

A friend of ours shared the double date story of their first meeting, and also about how she found out that the groom is allergic to one of her favorite foods.  The context and relatable story made it fun for everyone to hear.  If she would have simply stated, “I wasn’t sure about this guy, but I have come to like him anyway,” it would have been a boring cliché that wouldn’t have added anything to the toast.

There are roughly ten hundred billion better ways to introduce yourself during The Opener of your speech.  Please take this phrase and punt it off the side of the *flat Earth.  No offense.

* The Earth isn’t really flat.  At least, that’s what they want us to believe.

GIVE THE PERFECT WEDDING SPEECH